The Raven: Night of the Sinecore, by Justin Coloma (RiverRock Films Managing Director), introduces us to a beautiful neo-Dickensian noir future in which two men must face-off in a deadly vendetta.

Arkania, 2046. The fabled city trembles in fear of a new and terrifying menace: The Sinecore, a powerful breed of post- humans so sadistic that they must feed off the hearts of humans in order to sustain the source of their power. The Raven, the Sinecore-slaying alter-ego of weapons manufacturer Simon Roche, is the only one with the power to vanquish them. When Simon becomes entangled with the beautiful and mysterious Elena, however, he stumbles down a treacherous path that leads him to the one known as The Fiend: the leader of The Sinecore.

A dark, neo-noir tale of power, redemption, love and mystery, The Raven: Night of the Sinecore is a dark fairy tale -- an intricate latticework of art and prose set in a beautiful cyber-Victorian world. 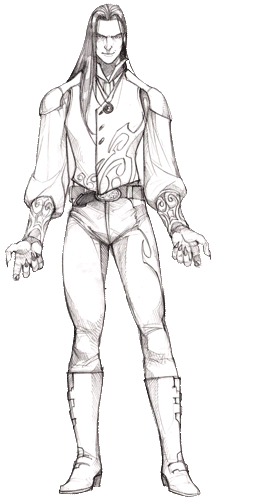 The Raven is currently in post-production, and is expanding into additional markets. The first edition was printed and presented by Justin Coloma at Comikaze, receiving a great reception amongst fans and industry insiders alike.

Simon Roche, a man forced to face his deepest, most haunting fears as he becomes The Raven, the only one who can save Arkania from a terrible breed of heart-eating demons called the sinecore.

The Raven has only one goal -- to find the Fiend, defeat him, and save Arkania from the sinecore forever.

The Fiend is the treacherous ruler of the sinecore, hell-bent on destroying the Raven and all that he stands for.